Do you love Netflix? Are you one of the millions who binged Outer Banks when it first premiered?

If so, we have exciting news for you.

Hot off of her breakout role as Sarah Cameron in the Netflix original series Outer Banks, 22-year-old actress Madelyn Cline has quickly become one of the most trending new actors in America through her new-found talent blended with increased viewership rates due to the lack of recent production amidst COVID-19.

The show landed a spot as Netflix's top show for two weeks straight following its premiere, with Cline’s performance captivating a large percentage of Gen Z viewers as well as younger millennials. But what most don’t know is that some of Madelyn Cline’s first days in front of camera were actually filmed by PMG back in 2014

While Outer Banks may have introduced many fans to the new heartthrob, Cline’s career in front of the camera started way before she became the famous “Sarah Cameron” - and even before her smaller roles like Chloe in Boy Erased or Tina in Stranger Things. One of her first times stepping in front of the camera was for a show called Discover Engineering which Puritano Media Group produced for the National Society of Professional Engineers (NSPE).

Thanks to a grant from S.D. Bechtel Jr. Foundation, we were able to produce a 3 episode series. The focus of the show was to allow young engineers to educate the public about tornado resistant technology and solar power capabilities.

When asked about his experience of working with Ms. Cline, Emmy award winning Director and CEO Charlie Puritano replied, “I remember her always being comfortable in her own skin, she took direction very well and was always a fun positive force while on set.” Puritano says he always had a good feeling about Cline’s future in film, but was still surprised to see how quickly she rose to prominence in the past couple of months.

Fast forward six years, Cline is now responsible for one of the fastest growth curves in social media traffic given a two month period.

Since the launch of the Outer Banks’ first episode, Cline’s Instagram has gained over 4 million new followers (as of June 11) and has grown another 600,000 this past week alone. This has attributed to more than 24 million total likes on her content, not including her multitude of fan pages that are responsible for thousands of views per week on their own.

As for Tiktok, to no surprise, her traffic has also been on the rise, corralling 2.3 million followers and amassing over 10 million total likes since April 15th.

While her personal twitter only accounts for 208,000 followers, the #madelyncline hashtag averages about 886 posts every single day, just above her character’s #sarahcameron hashtag with over 830 posts per day.

It regards to Youtube, Cline has been interviewed by well over 10 major entertainment publications from VOGUE to MTV and E-News, leading to over 22 million total views on Youtube in just the past two months. Fans simply can’t seem to get enough. Lucky for them, after dropping $50 million to film Outer Banks season one, the show’s creator Jonas Pate claimed he and Netflix have plans for at least four seasons in an article by the Charleston City paper.

Outer Banks is a Breakout Hit During Lockkdown

The swiftness of Maddie's rising new-found fame may have been intensified by the increased viewership rates that many streaming services have been reporting since the beginning of COVID-19. According to a Fox Business article, COVID-19 precautions have in fact caused Americans to watch much more TV than normal.

Nielsen measurements displayed a massive spike in streaming time, as March 2020 more than doubled the streaming numbers of March 2019. Increased viewership, paired with fewer shows being produced due to COVID-19 restrictions, creates the perfect storm for new shows to attain massive popularity. With the spotlight more focused than ever, Cline has been soaking up the public attention.

As Outer Banks fans eagerly await for their next dose of Maddie, the demand for more of her vibrant personality continues to grow. Unfortunately, her fan base will have to wait until October 15th, 2020 for her return in season two of Outer Banks. Fortunately for you, Puritano Media is releasing some never before seen footage on the young star to tide you over in the meantime. Head on over to our YouTube page and see for yourself. All you have to do is follow the link: https://bit.ly/2DhCKuD

What actress does Madelyn Cline remind you of? The office is torn whether or not she resembles a young Lynda Carter from the original Wonder Woman movie. What do you think? Let us know what you think in the comments below.

How Business are Using Virtual Reality to Thrive During COVID-19

Why Your Business Should Invest in Video Production

How Business are Using Virtual Reality to Thrive During COVID-19 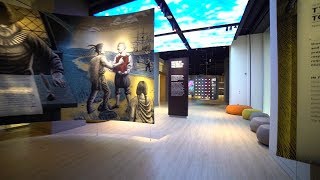 PMG Shoots Tour of Museum of the Bible